Piran: the town of salt 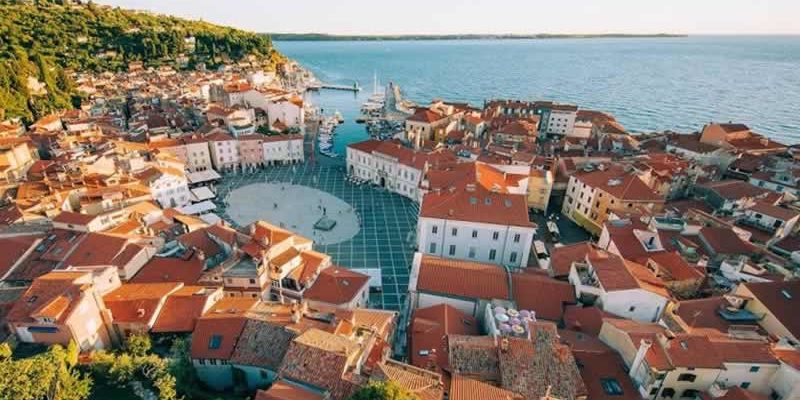 The most beautiful town on the Slovenian coast grew with the help of salt. The Piran salt pans, where the world-class fleur de sel (flower of salt) is still produced today using age-old methods,

were the reason why the picturesque Mediterranean walled town, with its church with a view and cultural attractions, flourished.

Piran is the most beautiful town on the Slovenian coast

The old port town with remnants of a medieval wall is protected as a cultural and historical monument. Narrow streets with closely constructed houses descending from the hill and its church to the central square on the coast only emphasise its Mediterranean character. This worldly coastal town, which developed under the influence of Venice, is considered to be one of the most authentic and most photogenic towns on the Adriatic coast. In addition to architecture, the Maritime Museum, an aquarium and other attractions, visitors flock to this town to enjoy events, the culinary offerings, and nearby special natural features.

Piran is one of the picturesque medieval towns of Slovenia. Lovers of defensive walls and other architectural and cultural features from times gone by can travel in Slovenia for a week, going from one historical town to another, from the coast to Ljubljana, and from the Alps to the Pannonian Plain.

Salt pans: the cause of flourishing economy and the source of health

The Piran Salt Pans, established in 804, encompassed the salt pans in the area of today’s marina (Lucija, Portorož), the smaller Strunjan Salt Pans, and the larger Sečovlje Salt Pans. The areas of all the preserved salt pans are now landscape parks. At the Strunjan Landscape Park, you will find an incredible cliff towering over the sea, and at the Sečovlje Salt Pans, you can learn about the traditional salt production with guided tours and a visit to the Museum of Salt-Making.

In the town that grew on salt, there is a Salt Making Festival every year in April. This festival revives the former celebratory beginning of the salt-making season, when whole families went to the salt pans to work. The main events take place in Tartini Square, which is dedicated to the grand violin virtuoso and composer Giuseppe Tartini, born in Piran. Every summer, the Tartini Festival of chamber music takes place in the town. The town, where painters return time and again to gain inspiration, also offers a number of other events. Follow the calendar of events in Piran!

Parenzana and other trails for active visitors

Piran provides many hiking, biking, and horse trails for active visitors. These trails connect this medieval gem on the coast with the lively tourist town of Portorož and other coastal towns, with landscape parks and, in particular, with attractions in Istria. Among the trails, the Parenzana , the 130 km long bike trail which runs from Trieste, Italy, past the Piran Salt Pans to Poreč in Croatia along the long abandoned railway tracks, is especially attractive for many visitors.